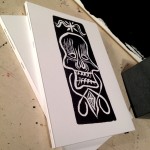 The first publication of Feral Transmission is presented as an introduction to subjects within the field of initiatory sorcery, eclectic esotericism and visionary poetry that are rarely expounded upon in contemporary literature. While acting as a conduit for a raw signal of initiatic volcanism, we are hoping to give voice to those individuals who will define the very concept of the transmission which we aim to keep in a state of flux and permutation.

The first issue, printed and hand bound in Gothenburg, is limited to 50 hand numbered copies of 42 pages. The complete issue is SOLD OUT.